This is the last of my posts about our whirlwind visit to Nepal. We had hoped to vist Nagi Gompa, high above the city, on our last full day – but once again it was not to be. Perhaps I will never go there again now. Instead we accepted invitations to attend Dakini Day practices at Rigon Tashi Choeling, and Pal Gyi Ling – the monasteries of Namkha Dri’mèd Rinpoche and Lama Wandü. Our group divided with half going to each event. 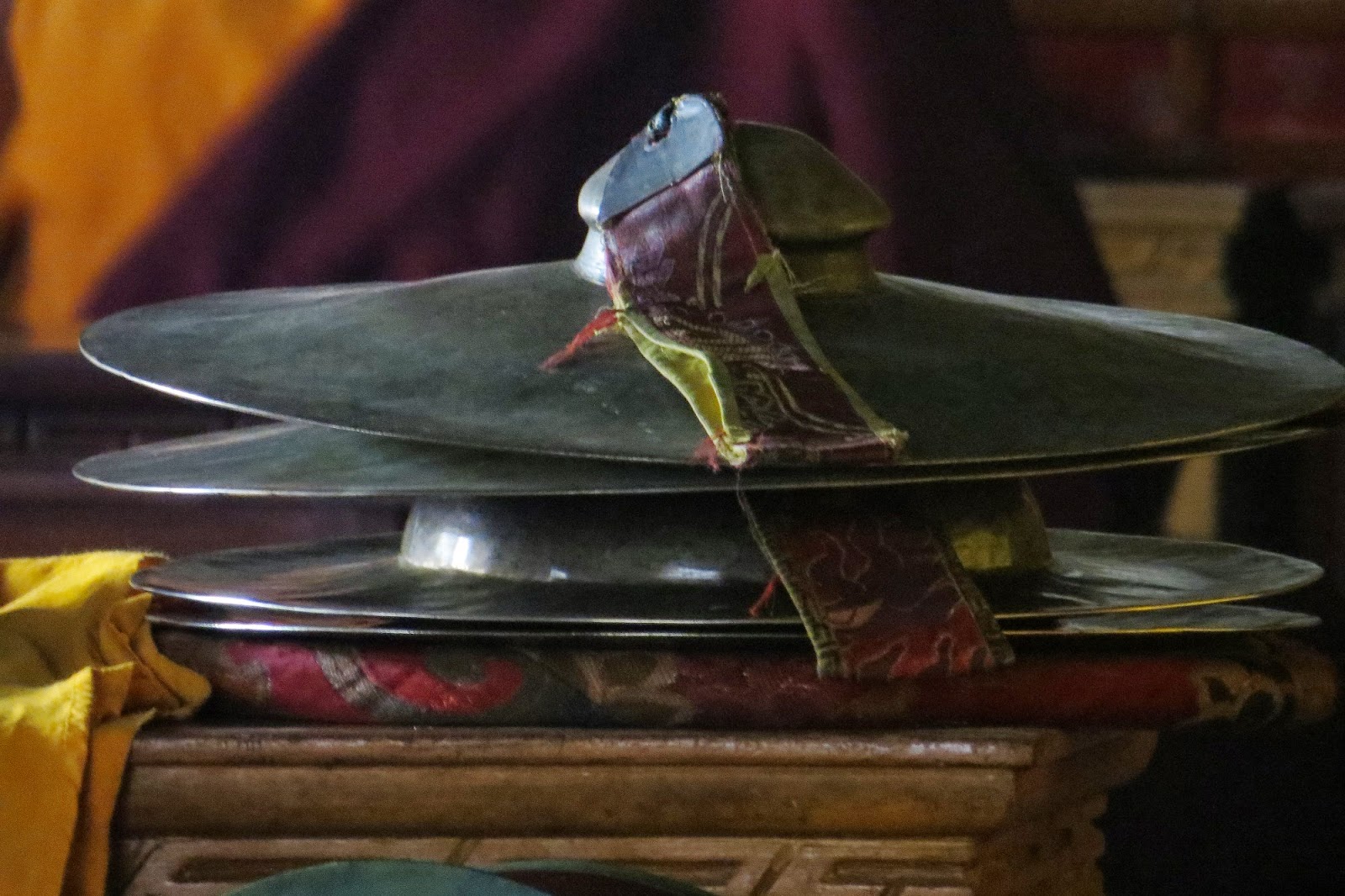 The tsog’khorlo rite at Pal Gyi Ling began at 08:30 and finished at 18:30 with a two hour break at noon. It was a powerful event with a monk gékor and a ngakpa gékor (master of ceremonies). We were most honoured to be treated as sangha, and were given pandit hats to wear at the appropriate moments. We had no text and there was no translation available, so we put on the hats when they did, threw rice when they did, and practised mantra throughout the day. Dorje Tsig Dün and the Lama’i Naljor of Ma-gÇig (Machig) Labdrön both scan with their delightful tunes, so I also quietly practised these at times during the ceremony. For a long time we respectfully refrained from taking photographs, but when we saw monks taking shots and even videoing things, we decided it was probably okay to take a few. 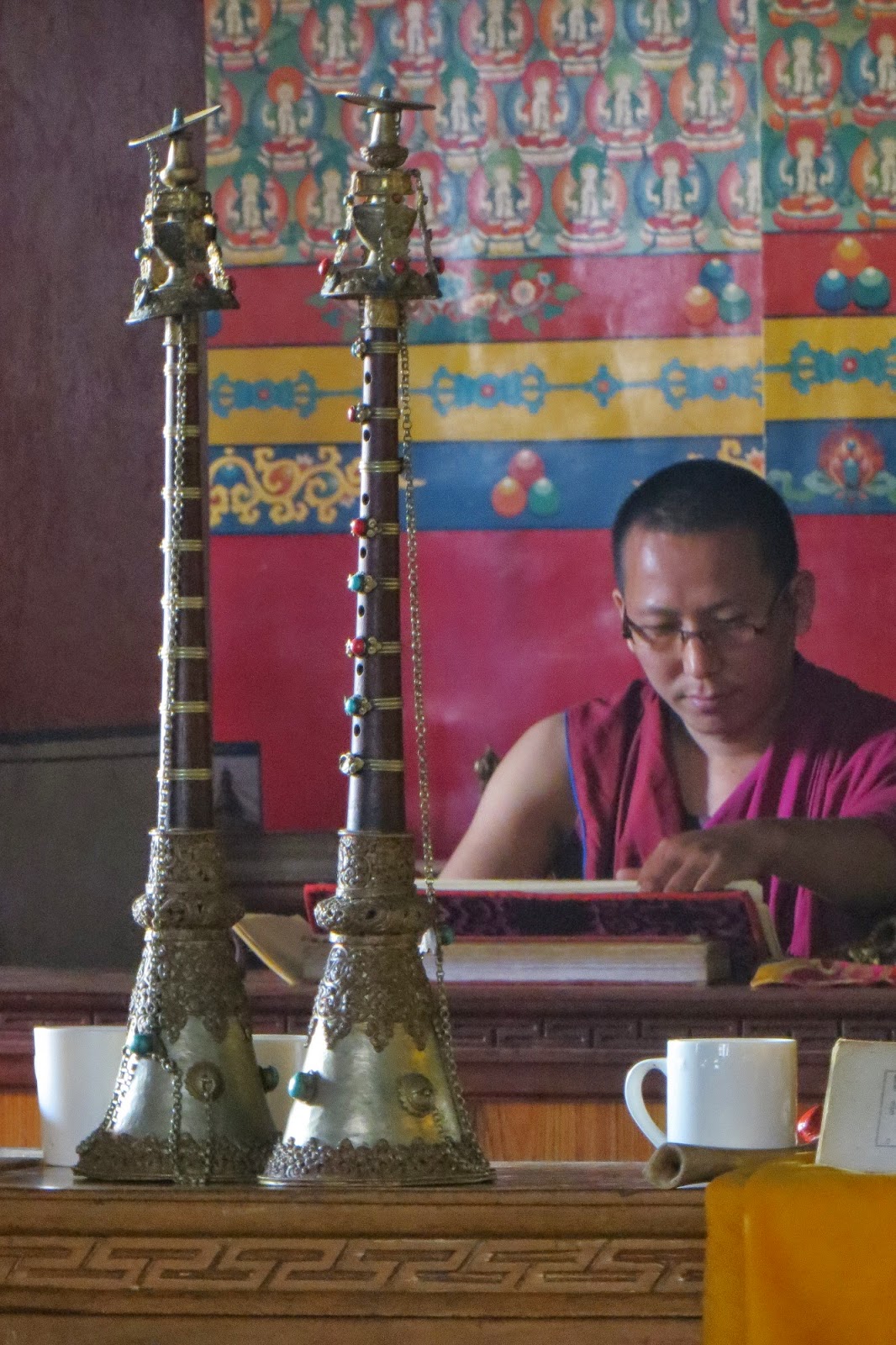 During the morning session we were sitting opposite one of the gékors, Ngakpa Dawa, and it was magical hearing his powerful voice and watching his fluid and elegant mudras. There were three Ngakpas taking part in the rite and about twelve or fifteen monks. Right in front of us sat two very young monks.
After the lunchtime break, Lama Wangdü led proceedings. As he came into the Gompa he greeted people, and when he spotted our group he came over and sang a line of the Lama’i Naljor of Ma-gÇig (Machig) Labdrön to each of us. We were positioned behind his throne, so we were not able to see much of him during the ceremony, but he had a fabulous gÇod (chöd) drum and an amazing hat with a bird at the front point. Ngakpa Dawa had been wearing the same type of hat until Lama Wangdü arrived. Lama Wangdü gave him and two monks gékor hats which they wore, when appropriate, for the rest of the ceremony. The number of people in the Gompa increased considerably in the afternoon—Tibetans, Westerners, visiting monks and nuns— and extra rugs were laid out for them to sit on.

It was an extraordinary practice with all the offerings thrown on a large bonfire in the courtyard of the monastery. At one point we all went out to the bonfire and witnessed a large torma and many other things thrown into the fire. Lama Wandü seemed to enjoy throwing things on the fire so that there was a burst of bright flame. It was quite theatrical. We then had to walk three times round the fire clockwise, and three times anitclockwise before returning to our seats in the Gompa. 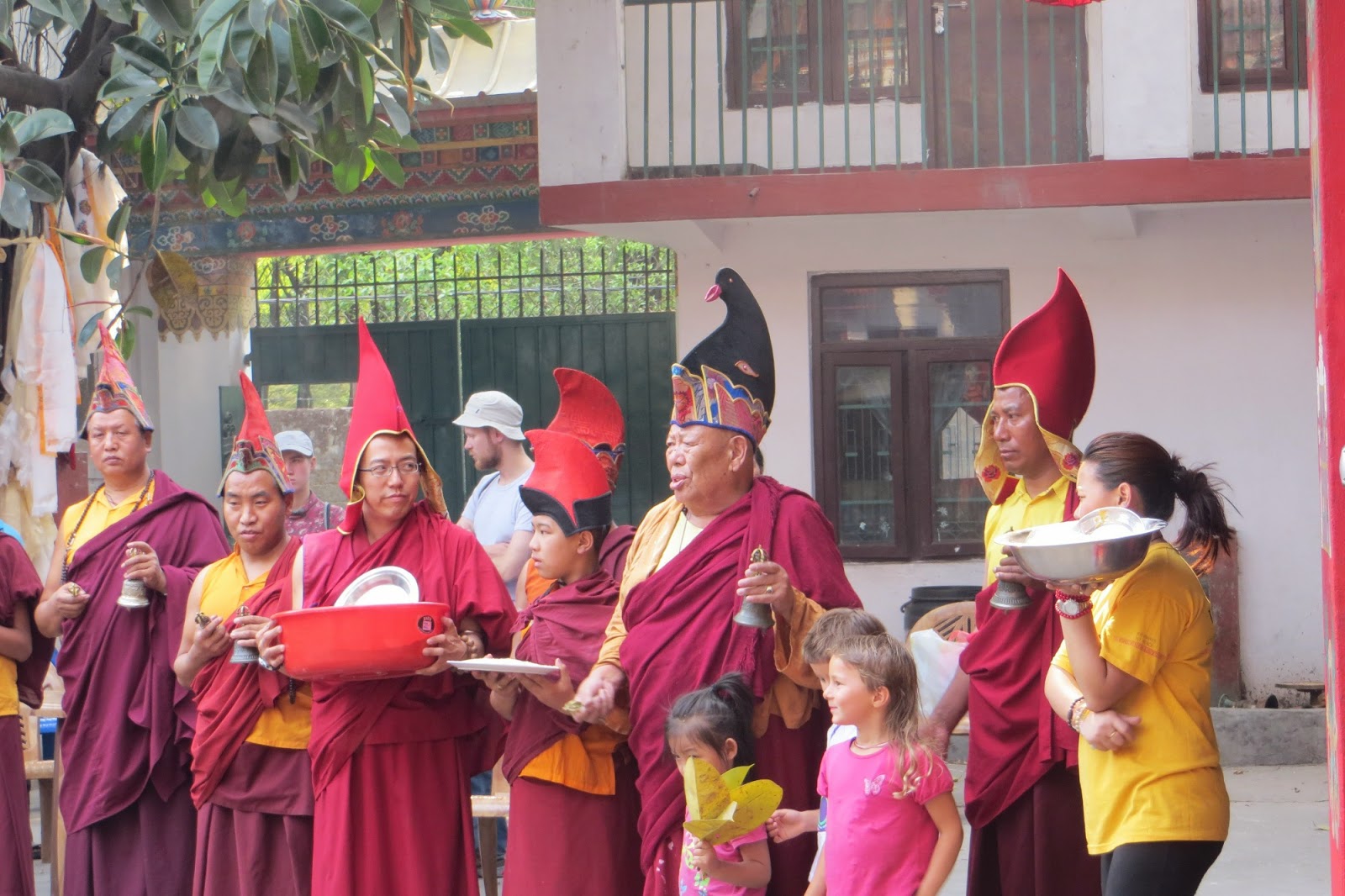 Only pre-prepared bags of food were given out apart from a spoonful of fried potato pieces. Money was also given to the practitioners – including us! When the rite was over, Lama Wangdü struggled down from the throne seeming stiff and in difficulty. Yet when he came to our group as he was leaving the gompa, he again greeted us with the lines of Lama’i Naljor and even performed a little vajra dance as he sang. So it was time to leave, with our bags of food and piles of money. We all put most of the money into the monastery’s donation box. The rest, and the food, we gave to beggars on our walk home. 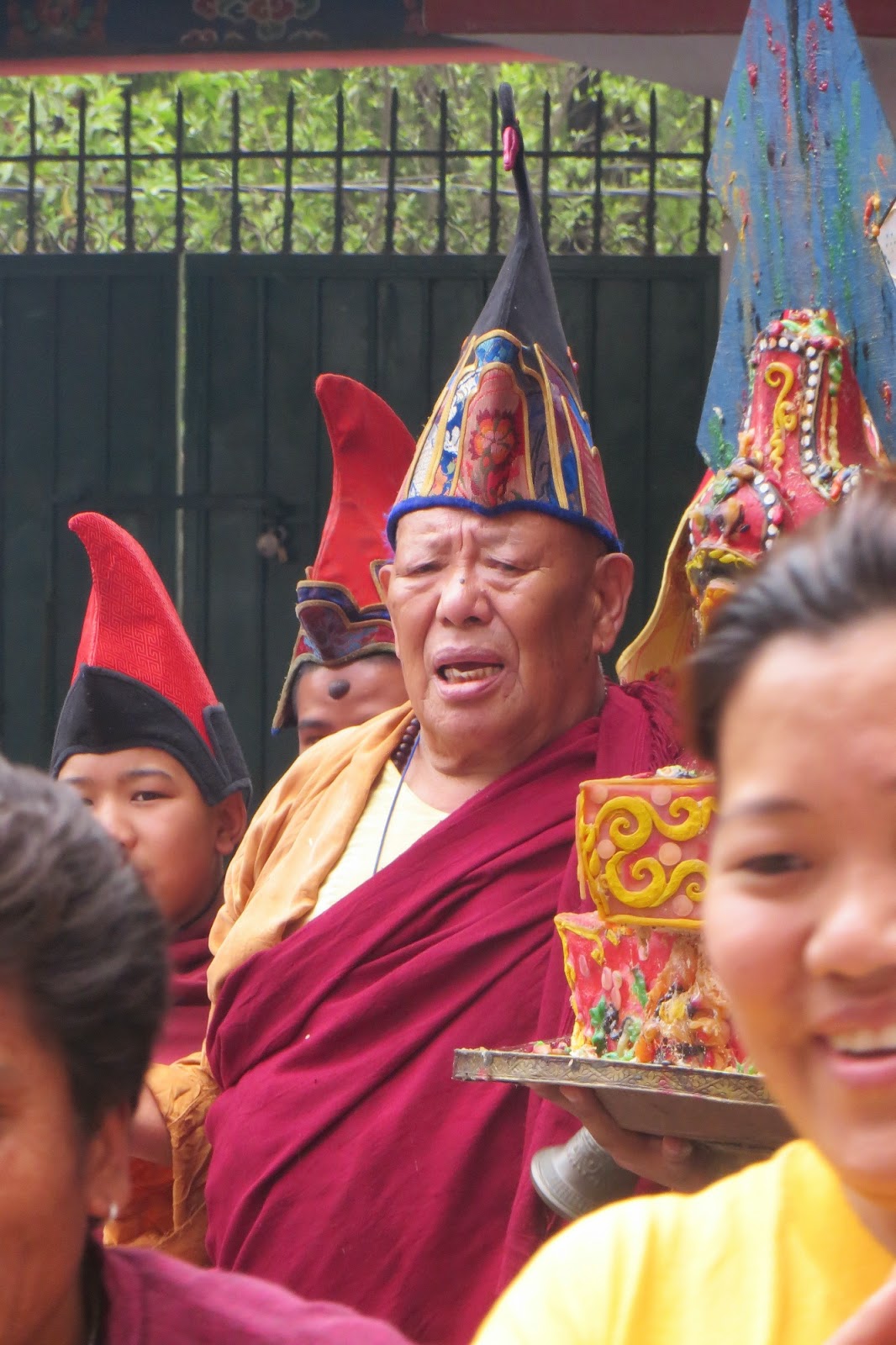 Just as we were leaving, a monk urgently indicated that we should not. We eventually realised that he was insisting that we joined the monks for a meal. So we went to the dining room and had a fast, but tasty meal in the gloom. As it was nearly dark by then, and there was a power cut, we could not see what we were eating, but it was good.

I felt a little choked up as we finished the day with a few rounds of kora at the Great Stupa, knowing it may be the last time I was ever there. ’ö-Dzin gets too sick in Kathmandu with his chest, so we may well never go again unless they sort out the pollution problem. It was a most special trip and I will always treasure the memories of it.
Posted by Nor’dzin at 15:24

Email ThisBlogThis!Share to TwitterShare to FacebookShare to Pinterest
Labels: Nepal