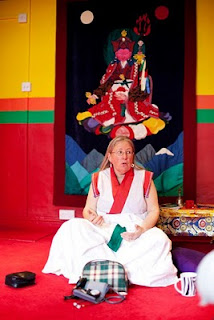 Aro Ling is the name of the Aro Lineage Buddhist Centre in Bristol.  It is located at 127 Gloucester Road.  I am there once a week on a Thursday leading lunchtime meditation and an afternoon sKu-mNyé class.  With my husband Ngakpa 'ö-Dzin Tridral we also teach occasional Saturday workshops, and in the new year I am hoping to offer an evening course.

A varied schedule of events is offered at the centre which opened in May this year.  The schedule can be viewed at the Aro Ling website.

The photographs were taken by Ngakma Mé-sèl Gyalmo at an open day on 30th October.  I taught two sessions on pulse diagnosis and demonstrated phurba dance.  In the first image I am wearing the robes of a teaching ngakma Lama of the gö kar chang lo'i dé – the non-monastic practitioners of the Nyingma tradition. 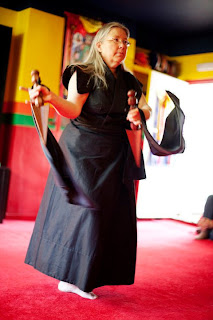 In the second picture I have donned the costume of the phur-gön cham to perform the dance of the protectors of the khyi'khor of Dorje Phurba.

The images show the shrine room at Aro Ling which is decorated in traditional style with the lower part of the wall in red, then bands of green and orange, then the upper part of the wall in yellow, with the ceiling and top band of the wall in deep blue.  There are many thangkas of awareness imagery hanging on the walls including the appliqué thangka of Padmasambhava featured in the first picture. 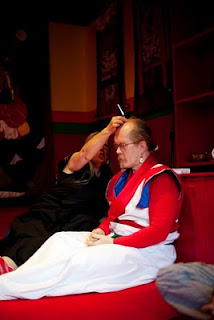 There was not time to change before my second teaching on pulse diagnosis.  Ngakpa 'ö-Dzin volunteered to be my subject for demonstrating listening to pulses using a sphygmamometer and stethoscope, and also for the stone echoes form of assessing the elemental diagnosis using a medical tuning fork – as shown in the third image.

Many practices of the Aro tradition were demonstrated on this open day.  There were demonstrations of the sword form of the gar-tak matial arts practice and the weaving of namkha – thread crosses.  I also helped several people begin a small applique of a tiger's face.
Posted by Nor’dzin at 23:30