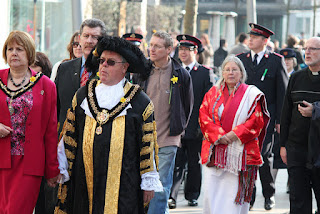 I was delighted to be asked to take part in the St David’s Day parade on March 1st as a representative of the Buddhist community. I was joined by several other local Buddhists of several traditions. We were placed near the start of the parade, right behind the Lord Mayor and Lady Mayoress. In this section of the parade were all the religious representatives, so we were with several members of the Salvation Army and with my Interfaith friend, Rev. Aled Edwards OBE of Cytun. 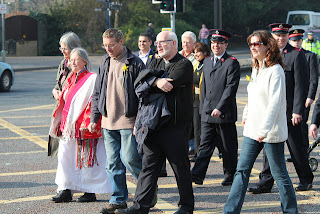 ’ö-Dzin spent his lunch break stalking us as the parade progressed and took some great photographs.

The weather was glorious and the atmosphere in the parade happy and friendly – a most enjoyable experience.  If we are invited again next year we will make a Buddhist Council of Wales banner.

Several famous names were included in the parade: 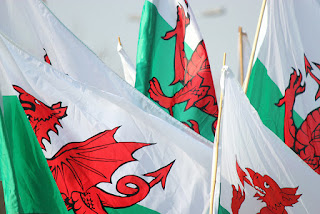 Email ThisBlogThis!Share to TwitterShare to FacebookShare to Pinterest
Labels: Interfaith