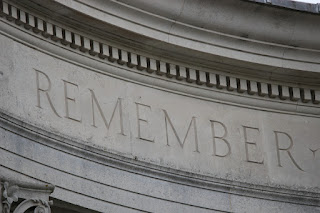 I attended the Wales Holocaust Memorial Day Service as Buddhist representative, which was held at City Hall in Cardiff.  The theme for the 2012 service was: Speak Up, Speak Out.  It was a thoughtful and beautifully presented service led by The Reverend Stewart Lisk, Hon Chaplain of Cardiff Council, remembering not only the Holocaust of Nazi persecution but other genocides since that time, such as Cambodia 1975-79, Rwanda 1994 and Bosnia 1995.

Literature accompanying the Order of Service identified eight stages of a gradual process that could enable a basic lack of respect and tolerance to escalate to a Holocaust: 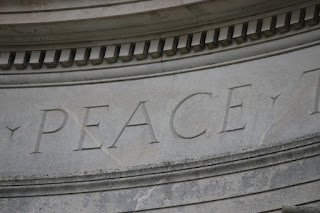 The Pledge was originally written by Gwyneth Lewis, National Poet of Wales 2005/6,
for the 2006 Holocaust Memorial Day service which had the theme: One Person Can Make a Difference:


The fight for justice starts and ends with me
Truth is the sound of what I may say.
I can only be well when others are free
And right has a price I’m prepared to pay.

I refuse to be afraid
Of force or hatred
I will pull their lie like weeds,
Plant gardens of more generous seeds.

If I turn my back and walk away
Who’ll ask for others what I want for me?
I can only be well when others are free
And right has a price I’m prepared to pay.

Email ThisBlogThis!Share to TwitterShare to FacebookShare to Pinterest
Labels: Interfaith