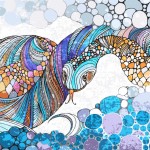 Next Saturday we will be celebrating Losar—Tibetan New Year—at Aro Ling in Bristol.  I have contributed a few momos to the event and we are looking forward to an enjoyable evening.  The old year seems to have decided to go out with a bang however.  We have heard of several extraordinary situations over the last week or so, and experienced our own as well.  On Thursday we had an electrical fire in one of our bedrooms.

The first I knew of a problem was when the lights went out in the office.  I thought it was just that the bulb had blow and did not think much of it, carrying on with what I was doing.  About an hour later however, I realised that none of the lights or the sockets in the main part of the house were functioning.  The kitchen—where I’d been working—is an extension and on a different circuit and the electrics were fine in there.  I checked the fuse box and two switches were tripped but it would not let me reset them.

Not knowing what to do next I called our electrician who thankfully was able to call round almost immediately.  To my horror I discovered on going to let him in, that there was smoke in the hall.  We traced it to the smallest bedroom.  The electrician checked that the door was not hot and then gingerly opened it a crack.  The room was completely full of noxious smoke but there was no sign of an actual fire.  We opened as many windows as possible, and the front door, and let the smoke dissipate a little.   Then our electrician held his breath, dived into the room and opened that window, coming out again as quickly as possible.  Once the smoke had dispersed some more he found the source of the problem and unplugged the extension lead from the wall.  This sorted out the electrical side of the problem. 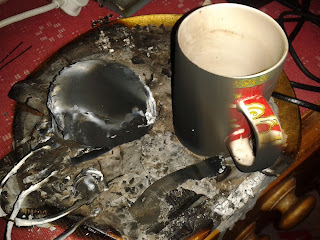 The picture shows all that remains of a small electric kettle and the tray it was sitting on.  The kettle must have been faulty and somehow become stuck in the ‘on’ position.  All that remains of it that is recognisable is the heating element.  The cupboard it was sitting upon has a nasty burn.  I think we have been extremely lucky.  The fumes were totally foul and if it had happened in the night they may have killed us before we became aware of a fire.  We were also lucky that there was nothing too easily combustible close to the kettle.

I am very grateful to our electrician who came round so promptly and knew exactly what to do.  I highly recommend Whitchurch Electrical & Security Services.

We’ve thoroughly washed down the room but it will have to be gutted and decorated.  The smell lingers and everything still feels dirty even though it has been cleaned.  Still it is also a great opportunity to sort the room out.  It used to be Richard’s bedroom and I painted murals on the walls for him.  Now it is time for it to be updated to an adult’s room and we’re going to rip up the carpet and lay a laminate floor.

This experience has made me very aware of the potential hazards of electrical appliances.  I am also really glad that we went to the expense and trouble of having a new fuse box fitted with lots of safety features.  It may have saved our home from a devastating fire.
Posted by Nor’dzin at 23:16

Email ThisBlogThis!Share to TwitterShare to FacebookShare to Pinterest
Labels: home