Conference on Unity and Diversity: Monastic and Non-monastic Traditions in Amdo 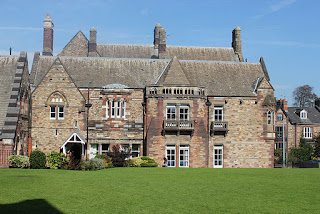 I attended the conference on Unity and Diversity: Monastic and Non-monastic Traditions in Amdo on Sunday 2nd October.  It was held in St Michael's College in Llandaff in Cardiff – a most beautiful building set in lovely, well-kept grounds. There were three presentations that morning.

The first was by Professor Paul Nietupski – The unity of religion and politics: Monastic and nomadic governance in Amdo. The Detri Estate (sde khri nang chen) at Labrang Monastery

He discussed that Amdo was considered to be uncivilised and barbaric because it was an area of nomadic grassland, and that nomadic society appears to have no boundaries and no government. Amdo society is multifaceted and polythetic. Authority is in the hands of nomad lords, monastic estate governors and monastic representatives. They are influenced by the Chinese, Muslim and Mongol borders. Governance is built on kinship. He discussed governance of a borderland area recognised as a state. The monastery city of Labrang is the primary influence in the area. He also discussed the Detri estate which is one of 32 estates in the region. The nature of the governance of the estate is multifaceted – there is no single hierarchy or fixed government, but a great importance of networking. Whether authority is recognised depends on particular tribes. Authority is based in wealth and heritage and it is a fluid changing structure. 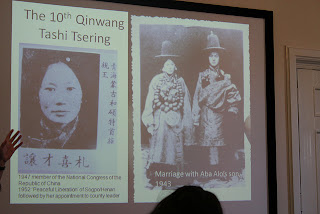 She discussed how the religious and political environment in Tibet is dominated by men, and yet women do become important. Even as early as the 7th century there were women in power, such as the cakravartin, Empress Wu Zetian (rl.684-704). Dr Diemberger focused on a particular episode in Henan (Sogpo) county where a woman, Tashi Tsering (1920 -1966), became the ruler, the 10th Qinwang. Tashi Tsering's family connections and connection by marriage enabled her to hold political power.
Dr Diemberger observed that it is unknown how much these women manipulated the system or how much the system manipulated these women. Tashi Tsering's daughter, Paljor Wangmo, has continued in politics and is still alive today.

The final speaker was Dawn Collins – Dancing the Gods: Modern Transformations of 'Cham in Rebkong

Dawn Collins spoke about her study of 'cham (ritual dance) and its effect on the audience. She explained that there are three kinds of dance and only one of these dances involves women – a dance for the nagas, who like slow meditative movements. 'Cham is believed to have a healing effect on observers, and to transform the mind of those who attend. It is also described as a preparation for the bardo state. She showed a recording of audience members going into a trance state and joining in the 'cham. Dawn Collins noted that the modern interpretation of 'cham has meant that the performances are shorter and dances are speeded up, and that the performance may be taken out of the ritual context completely – 'cham for tourism.
Posted by Nor’dzin at 21:52