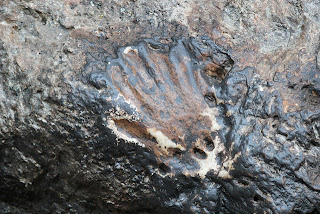 Yang-lé-shöd (Pharping in Nepali) is the sacred place where Padmasambhava and Yeshé Tsogyel manifested as Dorje Phurba and Dorje Phagmo: the thunderbolt nail and the thunderbolt sow.  There are a number of monasteries in the area and also several caves.  The Asura cave is the most well-known and has the imprint of Padmasambhava’s hand in the rock outside it.  It is an electric experience to place one’s own hand into the rock imprint.  I am not very tall and could only just reach to place my hand, and hence could not see the imprint very clearly.  It was extraordinary therefore, to look at ’ö-Dzin’s photograph of the hand print when we got home and see the fluid quality of the rock – exactly as if the rock had melted around Padmasambhava’s hand.  I feel so fortunate to have had the opportunity to place my hand in this imprint and feel a connection with the Tantric Buddha through my practice. 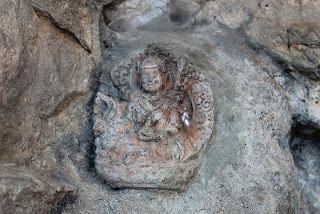 ’ö-Dzin also spotted this small tsa-tsa of Padmasambhava in the rock. 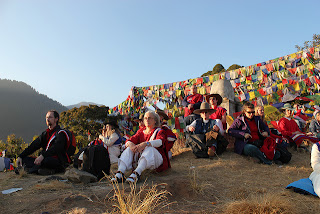 We then walked up above the Asura cave and found a small chörten (stupa).  This rocky crag afforded a magnificent view across the fields and town with a backdrop of the mountains.

We sat and meditated for a while and sang Dorje Tsig Dün.  Then a rather strange thing happened.  A friendly little dog had followed us up to the chörten and had sat beside me.   As I began to sing, the little dog became excited and climbed into my lap, licking my face and hands.  It was an inexplicably moving experience. 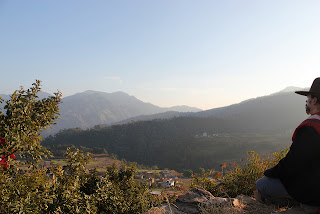 From this point, and up to the top of the hillside, was completely criss-crossed with prayer flags.  A few of us climbed up higher, ducking under the strings of prayer flags. 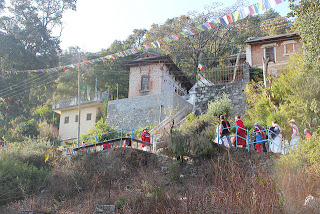 The drive back from Yang-le-Shöd in the two ancient and rickety hired buses was hilarious.  The driver of our bus kept turning round – either to avoid traffic jams or, so it seemed to us, because he was lost.  At one point he was driving the wrong way down a one way street.  We saw the extremes of Kathmandu that day: people living in shacks next to a rubbish dump, and a modern, new shopping mall that would not have looked out of place in any western city.  We lost track of the other bus and felt sure they would have been back an hour before us.  We found out later that they also had thought we would be home ages before them.  Then suddenly the two buses were in convoy again and we were practically at the hotel.  Amazing.

This was the last trip of the pilgrimage and this is my final post about it.  I am most happy to have had this experience one more time – especially as ’ö-Dzin and I do not feel we are likely to be going there again.
Posted by Nor’dzin at 17:30